Skrill vs Neteller: Which is the Best eWallet for Mobile Casinos?

If you're looking for an e-wallet to use at your mobile casino, then there's two clear front runners. Skrill or Neteller. Both e-wallets are widely considered to be some of the best and most used e-wallets around.

A payment method is only useful as the place you can actually pay with it. Either of these e-wallets could be amazing, but if you can't use them at your casinos, then it's simply not worth it.

We've done a more in depth breakdown of the withdrawal methods available at online casinos. However, for a quick very basic test, we looked through the top 25 mobile casinos that we've ranked at Android Slots.

Bear in mind that the difference between Skrill and Neteller in this instance is 5 casinos, even though the percentage is higher. However, it does go to show that a lot of casinos will choose Skrill exclusivity over Neteller.

In fact, we could only find one instance of Neteller activity, within the whole group. In terms of pure availability, it would appear that Skrill has the upper hand in this instance.

For the high rollers out there, it's likely that a lot of money is going to be passing through your e-wallet on its way to the slots. Players like this may be interested in the perks both e-wallets have to offer for members who spend more than the usual. 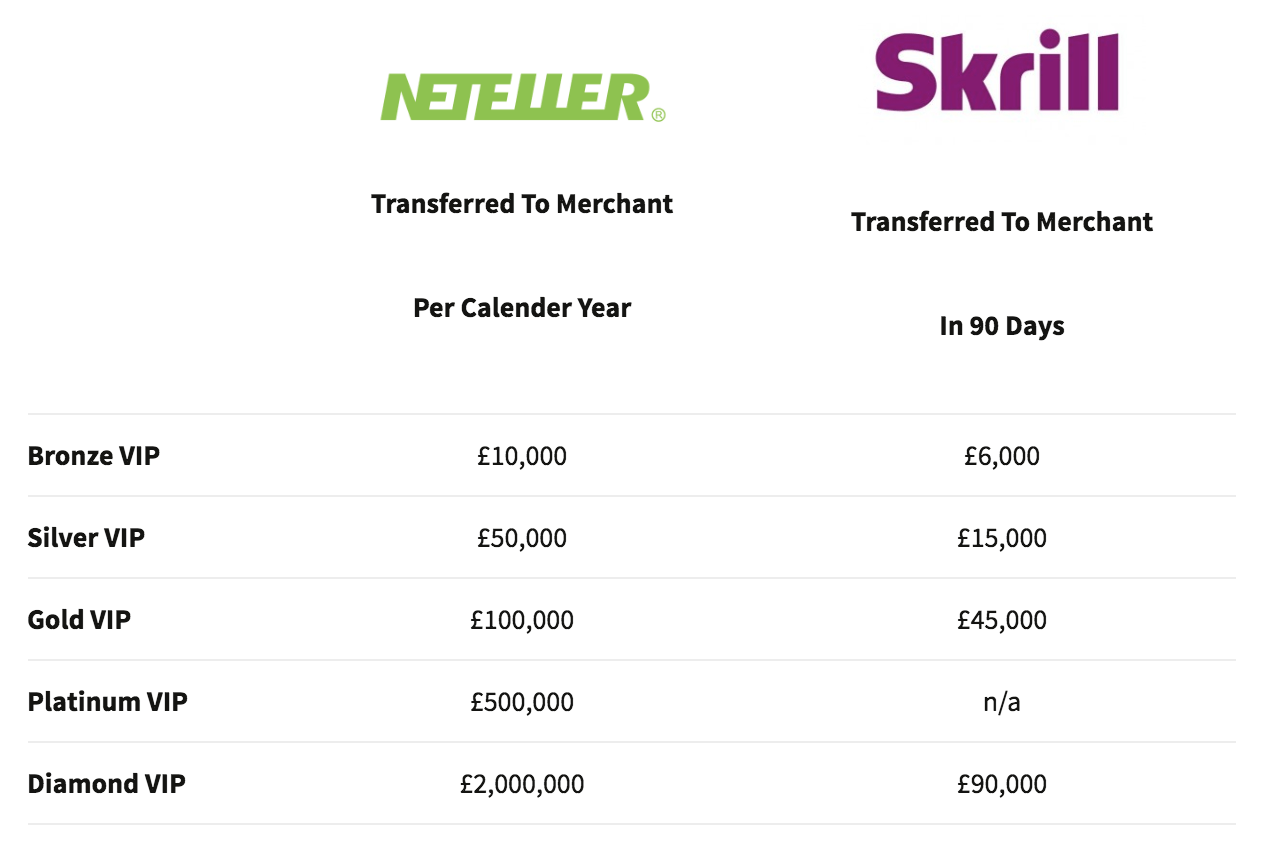 The numbers themselves would seem to place Neteller in the top spot and for the first 3 VIP plans, this does ring true. With Gold VIP status, Neteller asks you to transfer £100,000 across the year, whereas in the same time period, Skrill requires to transfer £180,000.

However, when it hits Diamond VIP, Skrill comes out on top, beating both Neteller's Diamond VIP services and the Platinum service above it. If you want to be top of the VIP ranking, then Skrill would be the smarter choice.

But for those who want the bare minimum advantages from VIP services, then Neteller offers much easier requirements to attain basic VIP status.

Of course, there's no point in becoming a VIP if you don't gain anything from it. Luckily, you gain a whole load of additional benefits from becoming a VIP with either service. But the important ones for the purposes of using a casino are the following:

You can see from this, that you effectively get the same number of accounts based on your VIP level. This is good if you don't mind which e-wallet you're with. If you're looking for the best bargain, then we can say that Skrill pulls ahead slightly, not in terms of rewards, but the amount it costs to receive those rewards in the first place. 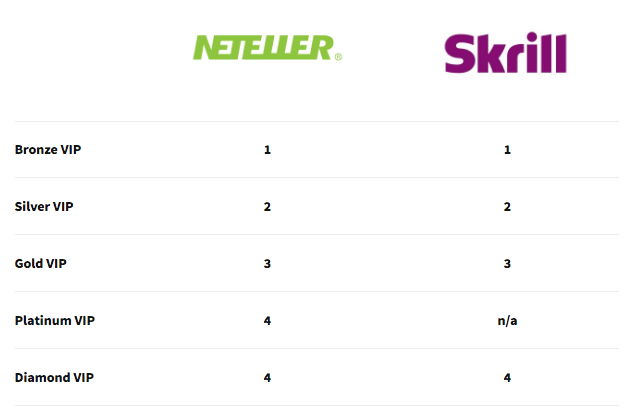 If you're after rewards that'll suit your casino needs, it can go either way. If you stay spending low, then VIP status will come to you much cheaper with Neteller. Start to use the service more and Skrill benefits you much faster than Neteller is able to.

Overall, we'd say it's simply cheaper to start enjoying the same benefits with Skrill, that you get for more with Neteller. We give Skrill the point here.

How Much It Costs You

This is a complete breakdown of the depositing and withdrawal costs, you should expect with both Neteller and Skrill.

The problems comes when we hit specifics. Neteller starts to add in small charges of 1.50% if you want your money deposited from your bank instantly. But this gets much worse when withdrawing money back into your bank.

Both Skrill and Neteller charge for this, but Neteller charges over double to withdraw money back into your bank account when compared to Skrill. These fees are dropped for Neteller as soon as you enter their VIP program, with Skrill forcing you to head two tiers into their VIP service before charges are completely dropped.

Overall, if you aim to be a VIP customer from the off, then Neteller is probably the way to go, but general consumers may find Neteller's charges distasteful during the withdrawal stages, in comparison to Skrill.

Using the account is half the issue. What about when you don't use the account. Skrill and Neteller both have charges for extended periods of not using their service, while having an active account. These charges will only be enforced on money that is stored within the e-wallet and won't be charged if the account is empty.

As you can see, overall Neteller allows for the longest period of inactivity, but will charge almost double what Skrill allows once the inactivity period goes over its limit.

For the casual user, when it comes to moving money, Skrill wins out immediately on price.

The inactivity charges will mostly only become an issue if you decide to use a non e-wallet based casino for a period of time. If you're the kind of person who might want to store money in your e-wallet for an extended period of time, then Skrill is probably the e-wallet for you.

Or you could try Paypal, which has no time limit on inactivity.

This is going to be a quick round up. When it comes to speed, both Skrill and Neteller are in an equally good place because they're both e-wallets. e-wallets are always immediate when it comes to withdrawing and depositing any money.

Any additional waiting time is always the fault of their casino and their own internal processing times. So in terms of speed, either is a smart choice.

There's a ton of extra benefits that separate the 2 e-wallets. However, we'll take you through the extras that'll improve your casino experience.

This will be a quick one.

We think you can probably make your mind up on which one you'd prefer.

When it comes to currencies, there's more of rift between Skrill and Neteller. In terms of sheer numbers, Skrill offers 41 currencies, whereas Neteller only offers 22 in comparison.

However, it should be noted that Neteller still offers all major European currencies, Russian Ruble, plus American & Canadian Dollars. Since most casinos take these currencies, you shouldn't really run into a problem when it comes to depositing at a majority of all casinos.

If you're the kind of person who travels frequently and likes to visit casinos on the go, then this could be an issue. But if you're mostly staying within the Western Hemisphere, you shouldn't have a problem.

But what of the exchange rates?

You'll notice that Skrill have ranges on their exchange rates. The amount you pay additional per exchange is based on the currency used. The lower charge applies for transfers that are between USD, GBP, CAD or PLN.

All other currencies are subject to the higher charge.

Skrill have covered the majority of the major currencies. However, it is surprising that Skrill haven't included Euros in their primary currencies. Alot of major casinos are situated within the EU territory, so this may be a problem if you want to deposit in an online casino within that area, as you'll be subject to higher exchange rates.

This is by far the trickiest category. On one end, Skrill does offer a free welcome bonus. And in terms of currencies, Skrill has the farthest reach.

However, since Neteller has over 22 currencies, it's certainly not tying your hands when it comes to international payments. The second major ball in Neteller's court, is the cheaper exchange rates. Skrill may be cheaper overall, but it's prices are only cheaper with certain currencies.

And being a UK based customer, who mostly exchanges money into Euros, we would not benefit from Skrill's cheaper exchange rates. In our situation, Neteller is far cheaper in the long run, even without a $20 free gift.

Obviously it depends on where you live. If you live outside the EU, then Skrill is definitely the way to go. But as EU users, we'll have to go with Neteller on this one, who remains cheaper regardless of if you're a basic member or a VIP.

So, how to sum up Neteller and Skrill? We'll let the final score do most of the talking. For the general casino user, Skrill is the way to go. It's cheaper when it comes to its charges, offers more currency options and is available in more places.

If you're aiming to be a high roller, Skrill also has the cheapest VIP program if you get into the higher echelons.

However, Neteller certainly has its strengths and this is by no means an easy victory. As we've mentioned, Neteller is best for EU users, since primarily Skrill has American customers in mind with its exchange rates.

Neteller also comes in much cheaper with its VIP programs, if you simply want to stick to the lower end of its reward scheme.

We hope all this has been helpful and you now have a better understanding of what each service offers to you, if you're planning to use an e-wallet as your banking option at casinos. Whether it's Skrill or Neteller, we hope you find exactly what your looking for.